I thought I'd jump on the festive season bandwagon. I don't do a lot of monsters and typical halloween stuff but occasionally I dip the toe in. First are a whole bunch of monster sketchbook-like drawings done for a local show a couple of years ago. I kind of put them together in poster format and yes they did sell for $45.75 ea as the poster says. Second is a demo started in an illustration class.They wanted a holiday themed thing so I started this painting on toned watercolor paper inspired by the creepiest people/zombie things in "rec" the original Spanish version of the recently released "Quarantine". I promised that I would work on it in class until finished. What have I done? And then if you are into super heroes instead of monsters for Oct. 31 I give you Captain Capibara recently returned from battle with Anaconda Woman. 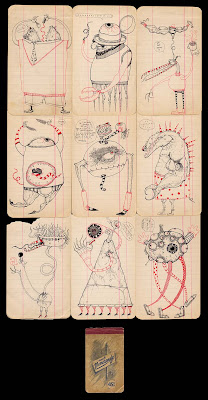 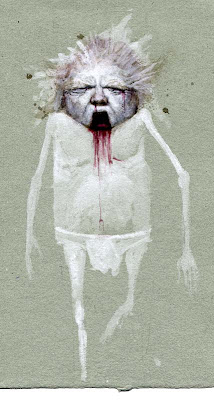 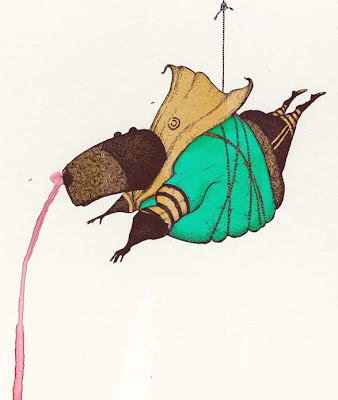 i love the zombie guy. i can't wait to see him finished. what's the full title of that movie? i'd much rather see the spanish version than the new one. speaking of disturbing movies, you should watch 'little otik'. it's one of my favorites, mostly because of the cannibalistic root baby/stop motion aspect.

thanks ashley. the full title is rec. it is from the record button on a video camera. i'll check out little otik.

that middle one is SO scary. made me jump. thanks a lot bill.

how big are your drawings??? mine are like 2 inches squarish. i know the altoid paintings are altoid can size. is this scary one that size?

thanks renee. the scary one is about 10" tall. it is a demo that i am still working for a class. i don't usually so things this scary. i have nightmares. 2" you are crazier than i am.