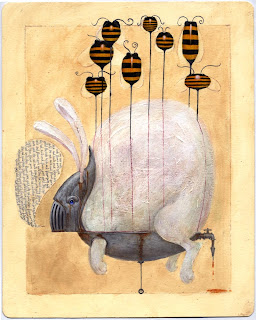 Latest Carman relief piece. And now it's in the home of a friend.
"Exits Red and Flows Gold"
Posted by bill at 10:07 AM 1 comment: Links to this post 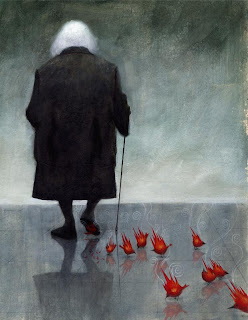 "Well, It was on Fire"
My show at Brumfield Galleries in Hyde park here closes on Sunday April 28. This painting along with other pieces are still available.

And check out my interview at Boise Public Radio/NPR.

Email ThisBlogThis!Share to TwitterShare to FacebookShare to Pinterest
Labels: misc.


More and more I have been getting requests for prints or posters. I haven't done them because they are, quite honestly, more trouble than they are worth. But because of the steady requests I will run an experiment one more time, I did something similar once and it didn't work out too well.

I will offer the image posted below, "18" with the provenance of having been use as the call for entry posters for Spectrum 18, for a couple of days. It is 16" x 20" printed really beautifully on heavy stock with a satin finish. There is Spectrum info across the top which can be easily trimmed or kept. I will sign it, though that might devalue the poster, and ship it in a tube for the purchase price of $20. (International people will need to pay a little more for shipping). If this works out, say 20-30 sales, then we can maybe offer the first ten images asked for by you all for prints on a limited basis.

Again this is an experiment to re-convince me that prints are a viable direction in the future. Please email me at: bcarman@boisestate.edu to cement the deal. 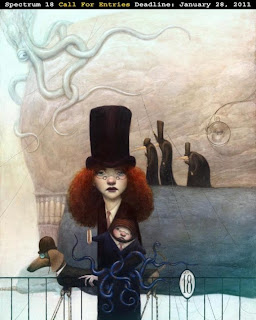 The illustrators over at Drawger.com are doing this exercise called 15 in 15 minutes. 15 artists that have shaped your visual thinking. Here are the rules that Yuko Shimizu has set up: "The Rules: Don't take too long to think about it. Fifteen Artists who've influenced you and that will ALWAYS STICK WITH YOU. List the first fifteen you can recall in no more than fifteen minutes."

I believe this is a great challenge that every artist should go through so I took a few minutes to gather my 15, very difficult because there seem to be so many.

Unknown: My mother had several of these beautiful Korean dolls around the house. I had wonderful nightmares about them coming to life and chasing me around the house with knives when mom was gone. She was the only person who could stop the dolls. 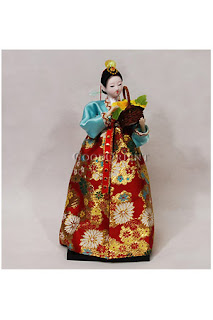 Arthur Szyck: These book covers have stuck with me since I was a child. I only recently learned the illustrators name and have enjoyed looking at an expanded view of his work. 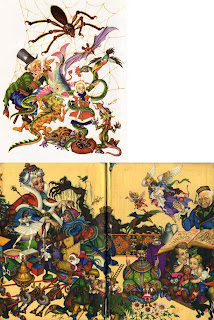 James "Flournoy" Holmes: The Allman Brothers' album "Eat a Peach" and album artwork, inside and out, had a profound effect on me when I was young. 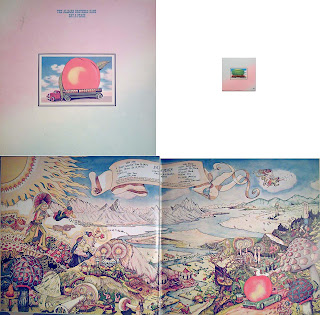 Roger Dean: And of course other albums and album artists further fueled the fire. 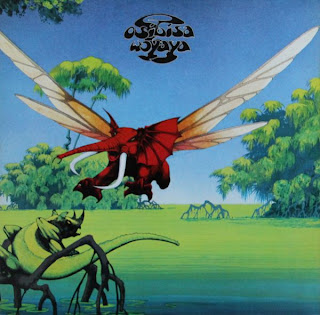 Wayne Anderson: The first children's book I ever bought was "The Magic Circus". Wayne Anderson's work is still influencing me to this day. 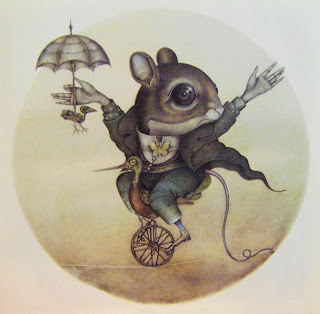 Frank Frazetta: Not many young artists went unaffected by Frazetta. I might have been affected more by his ink work than his paintings. 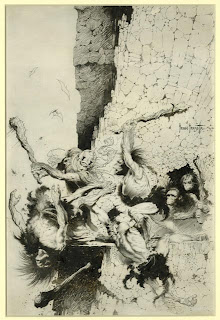 Brian Froud: When I stumbled upon the work of Froud a whole new world was opened to me. And although I didn't discover his work until much later Froud opened the incredible door to Arthur Rackham's universe. 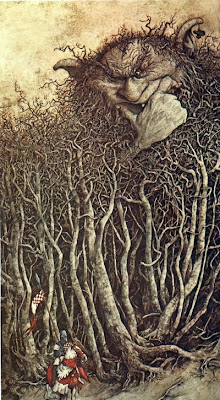 Jan van Eyck: When I first opened an art history book "The Ghent Altarpiece" was burned into my psyche. I have a bucket list goal to see it in person. 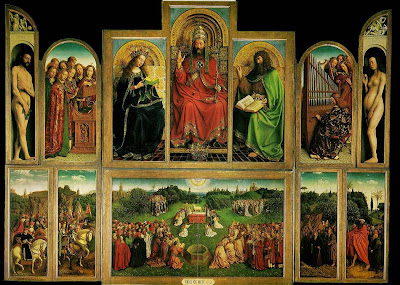 Rogier van der Weyden: Then when I finally left the house and visited a museum I marveled, yes I said marveled, at this tiny "St. George and the Dragon". I couldn't believe that someone could paint that beautifully so small. 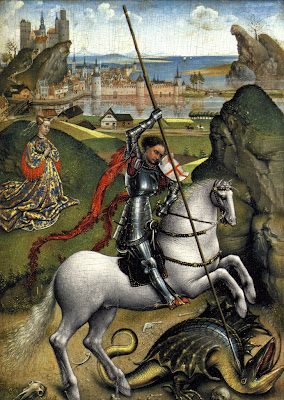 Jan Vermeer: I had my first physical experience with art in front of three nearly perfect Vermeer's hanging in the National Gallery. 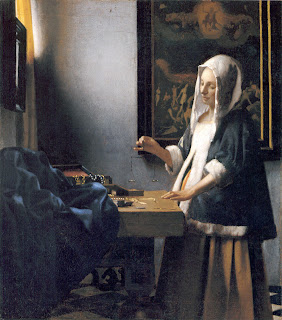 James Christensen: My teacher and mentor was the person who most influenced and affected my career as an artist. It's his fault so stop blaming me. 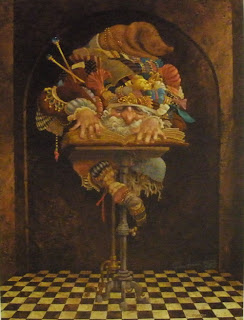 Brad Holland: As James and others started opening my eyes to the world of illustration huge influences started piling on. 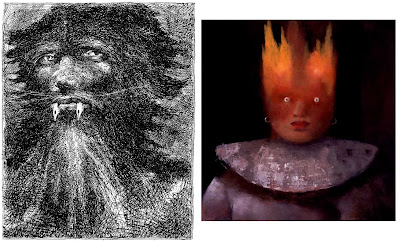 Alan Cober: One of the most intuitive and sensitive illustrators ever. 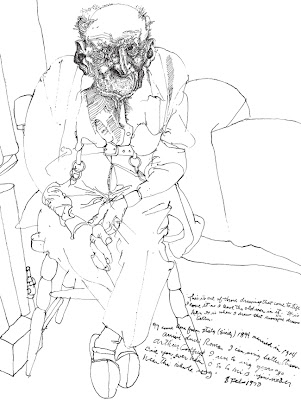 Ian Miller: When I first discovered Ian's work I was in junior college. It just blew me away. His work is every bit as influential to me today and continues to blow me away. 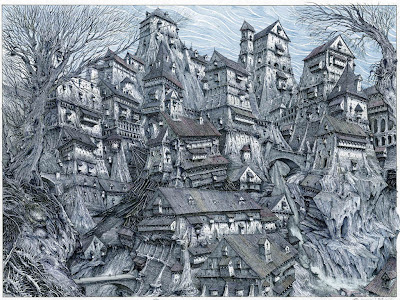 I'm cheating a bit on this last group. These are a few artists I discovered in school whose compositional cues I wish I had the courage to follow. I couldn't choose just one.
Degas, Sargent, Wayne Thiebaud, Richard Diebenkorn. 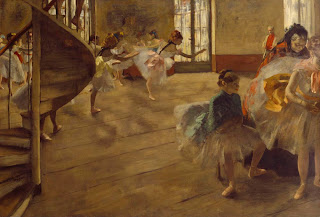 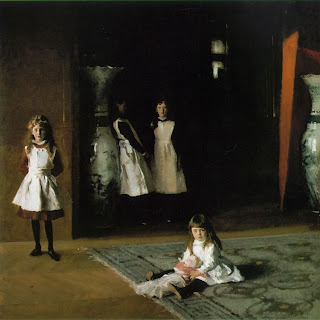 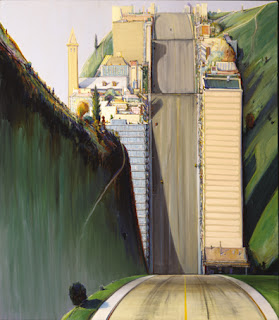 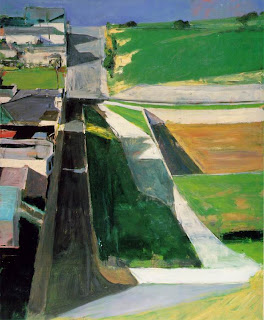 Now these were profound influences up to and including my time in school. The list iswoefully incomplete but the first I could think of. I had fun doing this so at some point I'm going to put together another list of influences after school. I enjoyed this and maybe you learned a little about me. 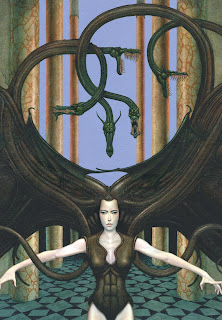 Look, this painting is sitting on the floor in my studio, framed behind glass and ready to go. I've had it a long time. It's 11x14 painted in oils using a scraping and glazing process.If anyone is interested contact me. Make me an offer and don't be embarrassed. All I can do is say no. It's an important part of my history, sort of pivotal, but I am far from sentimental. Could be worth millions when I die. 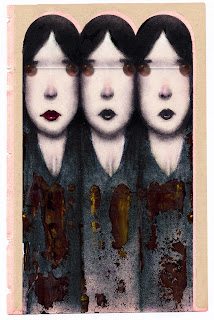 One thing I really enjoy doing is coming across old drawings which scream at me to update them. Some of them update quite well and may even make the portfolio cut. I am updating all of my portfolios to be more concise and simpler. Stay tuned.
"The Triplets"

Posted by bill at 9:44 AM No comments: Links to this post